Yet Another Blog Against the Body Scanner 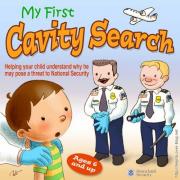 With Thanksgiving last week and the TSA’s stepped-up usage of intrusive backscatter scanners, there has been a lot of chatter on blogs and tech websites.

Take Gizmodo for instance. They reported that the MythBuster’s Adam Savage walked through a backscatter scanner (while commenting on how small it made his penis feel), and the two 12” steel razor blades in his jacket were not detected.

Today they reported that a woman who is wheelchair-bound stripped to her lingerie and was still subjected to a 1-hour pat down and interrogation. She missed her flight.

Printed patterns are beginning to appear on clothing that will be visible to these scanners. There are reminders of the fourth amendment. Fig leaves. Even PETA is getting into gear with matching bras/panties that say “Be proud of your body scan. Go Vegan.” Unfortunately it seems like the fig leaf print (and possibly the others) will subject you to a pat down, if the woman in the wheel chair is any indication.

The worst part about all of this is that these scanners don’t work. In addition to the story above, there is an interesting quote that has been going around (to the Canadian Parliament):

“I donât know why everybody is running to buy these expensive and useless machines. I can overcome the body scanners with enough explosives to bring down a Boeing 747. Thatâs why we havenât put them in our airport.”

â Rafi Sela, leading Israeli airport security expert, referring to Tel Avivâs Ben Gurion International Airport, which has some of the toughest security in the world

It appears that, as with many military or security deals, there have been a lot of folks traded between our government and the companies that are building these scanners.

You may also remember that the TSA has sworn that no pictures will be saved. They will grant you some privacy. Well, machine specs require that they be capable of storage and transmission (in real time) of scans. Their statements that this will not be used in production is what we are all banking on:

While TSA WBI Scanners technically have the capability to store and transmit images, the machines can only perform this function in Test Mode, a function not carried out in an Operation Area.  Placing a WBI Scanner into test mode is not something that can be in the field, at an airport where the units are deployed, and it cannot be done by anyone without âLevel Zâ authorization.

All the same, I will not soon forget the images stored from the Orlando courthouse. They were retrieved for review under the Freedom of Information Act and, while they are not as detailed as images from the airport scanners, they show the direction I think this is headed. Cell phone cameras can capture what the “authorization” can not, and there have already been stories of coworkers jostling each other after one walked through the scanner.

Some of my favorite parodies so far are a bit risque. I won’t embed the pictures, but you can click if your sense of humor is as warped as mine:

PS. Please pardon the slightly bizarre wording of the title. I chose the words to get the attention of our wonderful Department of Homeland Security (pages 17,19 of this PDF). They should know that I do not favor them in any way.

I’m going to have to go back and forth between Asia and America by ship. Andrew had the right idea. Lol.

Invite him along? Lol.

It was such a small town that we didn’t even have a village idiot. We had to take turns.

END_OF_DOCUMENT_TOKEN_TO_BE_REPLACED

Since This Page Loaded...

0 million dollars have been spent by Washington.
0.00 dollars per person in the US.

And that is only Federal spending...

0 babies have died worldwide in an abortion.
0 babies were in the United States.

0 Americans have contracted an STD.